Algorithmic Trading Portfolio correlation with other funds equals to zero

It goes without saying that investors seek to make a positive return on their investment portfolios. Each investor forms investment portfolio very individually. Some rely more on investment rules, other less so. Either way, most investors rely on correlation as it plays a significant role in investment management. One of our potential customers asked to see how Algorithmic Trading Portfolio compares to other systematic – algorithmic funds based on returns correlation. We have decided to share a few graphs with you. 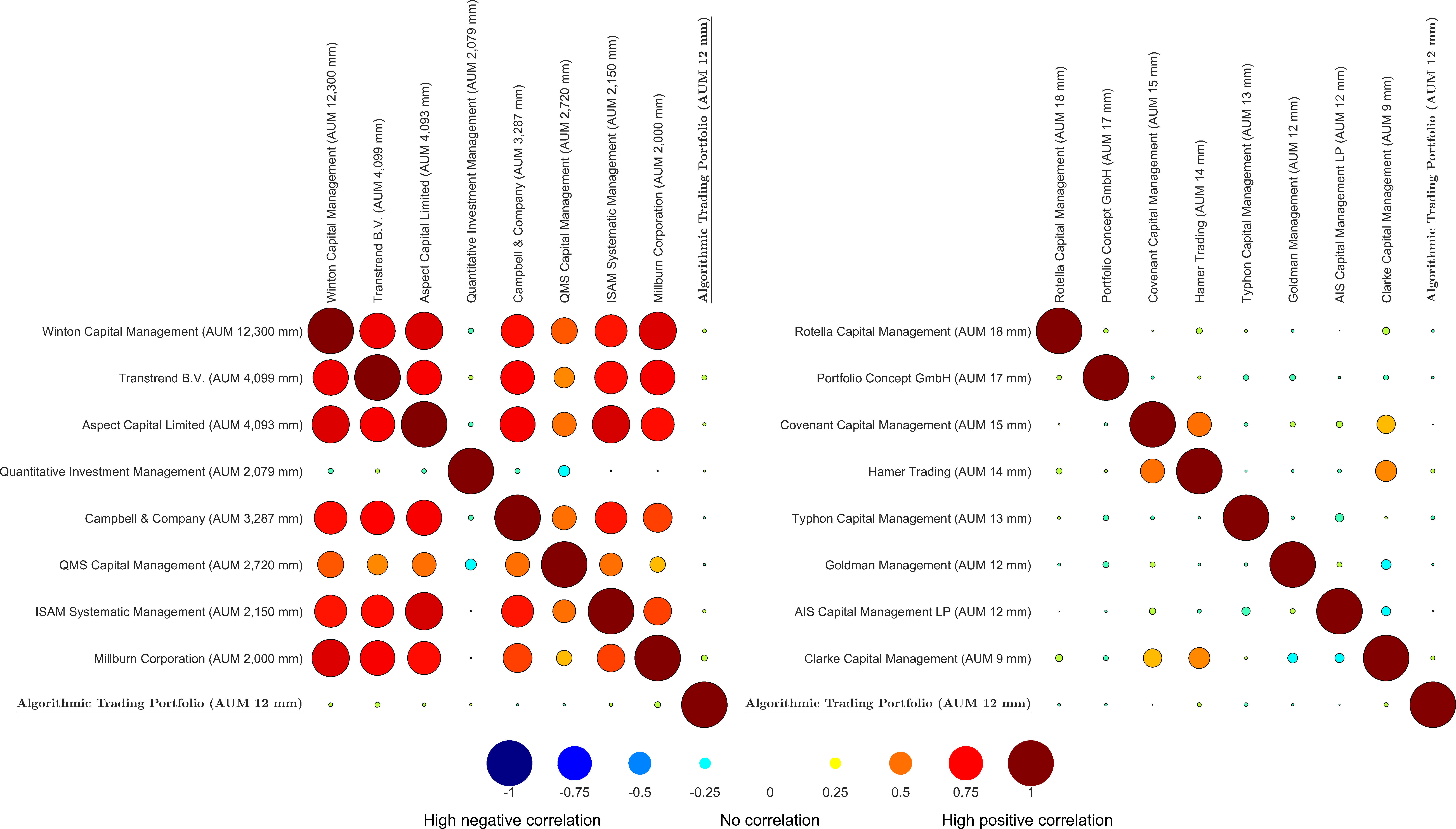 Graphs clearly show that large algorithmic funds are more likely to have correlated returns with each other than smaller ones. Typically, it is caused by liquidity problem. A smaller algorithmic fund is more flexible and can exploit wider range of trading strategies than a large one. Take for example Winton Capital Management algorithmic fund which manages 12.3 billion dollars of assets. It is hard to imagine how such a large fund would trade at night session when liquidity decreases considerably. It would also be difficult for a such fund to trade in higher frequencies. Therefore, large funds usually try to catch larger market trends and hold investments longer. This leads to similar and more correlated returns of large funds.

Meanwhile, small funds which manages from a few to tens of millions can trade in high frequency, at night time and trade less liquid financial instruments. Small funds are much less likely to correlate both with small and large funds. Thus, such funds are more suitable for the investment portfolio.

It is vital to perceive that financial markets are becoming more global than ever. They become highly dependent on each other, so if one falls, then usually so does the others. Consequently, it becomes increasingly difficult to find investments which would have a low correlation with other investments. Our advice to any investor is simple – make a wider diversification by mixing a variety of investments with as low correlation to each other as possible. Then the risk will be low.

All posts
Algorithmic Trading Portfolio (Investment fund) is alternative investment fund designed for Professional or Informed investors only and supervised by the Central bank of Lithuania. The information contained in this webpage does not constitute a solicitation or offer to invest in any financial products. It does not constitute legal or fiscal advice nor does it provide specific investment advice. Detailed information about the fund can be found in the fund’s rules, prospectus and Key investor information document that can be obtained from Orion Asset Management. The data has been compiled from sources deemed reliable and is accurate to the best of our knowledge; however, we accept no obligation whatsoever from the information given in this webpage. Orion Asset Management assumes no (direct or indirect) liability for any losses which result from the data and information published herein. The offering and sale of the products described in this webpage is legally restricted in certain jurisdictions. Persons who are subordinate to such jurisdictions have to inform themselves about such restrictions and must adhere to them. The prices stated are net of all fees; front load and taxes have not been taken into account. The potential for high returns of this investment strategy is combined with significant risks. Even a total loss of the invested capital is possible. Performance from the past is no guarantee of future results. Funds management company is not liable for the losses of the fund suffered due to the fluctuations of financial markets. It is strongly recommended to overview Fund's Prospect and Articles of Association before making a decision to invest in the Fund.
Message send